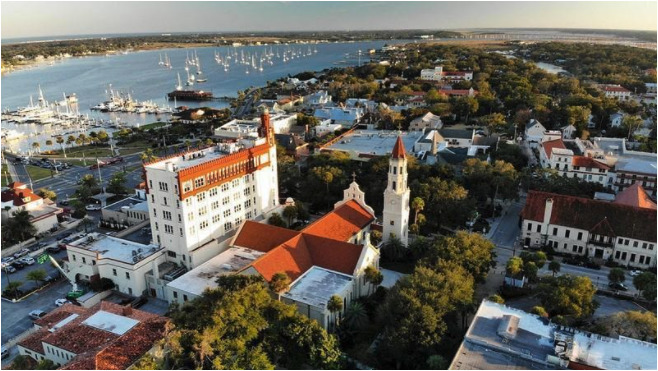 It’s been a few years but one of our favorite saltwater destinations is St. Augustine, FL.  Not only is it a great boat trip but the city itself is beautiful, and full of history. Founded in September 1565 by Don Pedro Menendez de Aviles of Spain, it’s the longest continually inhabited European-founded city in the United States.

Our trip begins with an hour and a half tow to Daytona Beach and the Atlantic Intracoastal Waterway.  Being a little pressed for time, since we were making this a day trip, we looked for a ramp just north of Daytona and picked Cassen Park off Hywy #40 in Ormond Beach.  Not a great call!  The ramp and parking were too small so we regrouped, headed south a few miles on Riverside Drive and launched at the Sunrise Park Ramp.  Parking the truck and trailer was a challenge.  Since it was a weekday and not very busy, Dustin made it work. We had no problem launching.  It was mid-morning in the middle of an outgoing tide.  We did kick up some sand turning around heading out the channel to the Atlantic Intracoastal Waterway.

The AIWW extends more than 1,100 miles from Norfolk, VA to Key West, FL. Some lengths consist of natural inlets, salt-water rivers, bays, and sounds; others are man-made canals. Congress authorized its creation in 1919.  The entire waterway was completed in 1940. During World War II, the route became important as a means of avoiding the submarine menace along the coast. Afterwards it was used extensively for commercial marine transport. Today the waterway is used less for commercial traffic and more by hundreds of thousands of fisherman and recreational boaters like us.

Once we were underway the trip to St. Augustine was a leisurely 2 hour cruise. First slow speed zone we hit was the Hywy #40 bridge. It was very short, 5 minutes later we were back under way. That was the case for most of the trip. We encountered a slow speed zone through all the bridges Highbridge, Route #100 Flagler Beach, Hammock Dunes Palm Coast, Hywy #206 Crescent Beach and Hywy #312 just south of St. Augustine. The longest one was Palm Coast, about 15 minutes to get north of the marina. There was also a few 25 MPH in the channel signs which had some seasonal language. Our video will give you a flavor for the waterway and scenery along the way. The waterway is well marked, so following the “Red Right Returning” rule we had no trouble with water depth.

From the Hywy #312 bridge our destination was clearly visible. St. Augustine is a step back in time. The history of the city stretches over four hundred and fifty years which is why it’s commonly called the “Nation’s Oldest City.” Two historic landmarks you’ll notice immediately are the lighthouse to your right and the Bridge of Lions dead ahead.

St. Augustine Lighthouse & Maritime Museum is an active, working lighthouse. It stands at the north end of Anastasia Island and was built between 1871 and 1874. The tower is the second lighthouse tower in St. Augustine, the first being lit officially by the American territorial government in May 1824. The museum is open to the public 360 days a year. Rumor is….it’s haunted.

The Bridge of Lions was built in the mid-1920’s, completed in 1927. This beautiful bridge is a double-leaf bascule bridge, also known simply as a drawbridge, one of many found on Florida’s AIA. In 1982, the bridge was added to the National Register of Historic Places. In 2010, it was renovated by the city. Our video will show the bridge in action as the “Lady Victoria” was departing.

On the north side of the bridge two more iconic St. Augustine landmarks come into view, Castillo de San Marcos National Monument (old Fort) and The Shrine of Our Lady of La Leche at Mission Nombre de Dios (great cross).

Standing sentry over St. Augustine for over 300 years is the formidable Castillo de San Marcos. Positioned strategically on Matanzas Bay, the fort was built by the Spanish to protect the town and is the most often visited historic site in St. Augustine. After 9 wooden forts were burned by invaders, the Spanish militia took on the monumental task of constructing a stone fort that would protect the city and its treasury from pirates, the British and other attackers. The Castillo is made from coquina, a locally sourced stone-like compound made of shell and limestone. Seems the tenth try was the charm, as the fort survives today as the oldest masonry fort in the continental U.S.

The Shrine of Our Lady of La Leche at Mission Nombre de Dios (means Name of God) traces its origins to the founding of the city of St. Augustine in 1565. Father Lopez, the first parish priest of the mission, celebrated the first mass and began the work here at America’s first Mission. On the grounds guests will find numerous artifacts, both sacred and secular, from the very beginning of the Spanish settlement in St. Augustine.

We arrived just before 12:30 PM or so. After a short cruise around the bay outside the fort we headed back to the city marina just south on the bridge. Tide was more or less neutral, so we had no problem checking in and signing up for an hourly slip ($5.00 per hour). Daily rates are reasonable as well, $2.10 per ft. per day up the six days. After a quick bite to eat at South-A-Philly Steaks and Hoagies we left the dock at 2PM heading south for Daytona Beach. The trip back was a little quicker. We arrived back to Sunrise Park just after 3:30PM.

Chances are we’ll be planning a return trip to St. Augustine as one of our events. In the meantime, if you’d like to make the trip and have any questions, just give us a shout. With so much to see, and do, we highly recommend this as a weekend trip.

For more information about St. Augustine visit the links below or watch our new YouTube video – Exploring Our Backyard Waterways: St. Augustine. 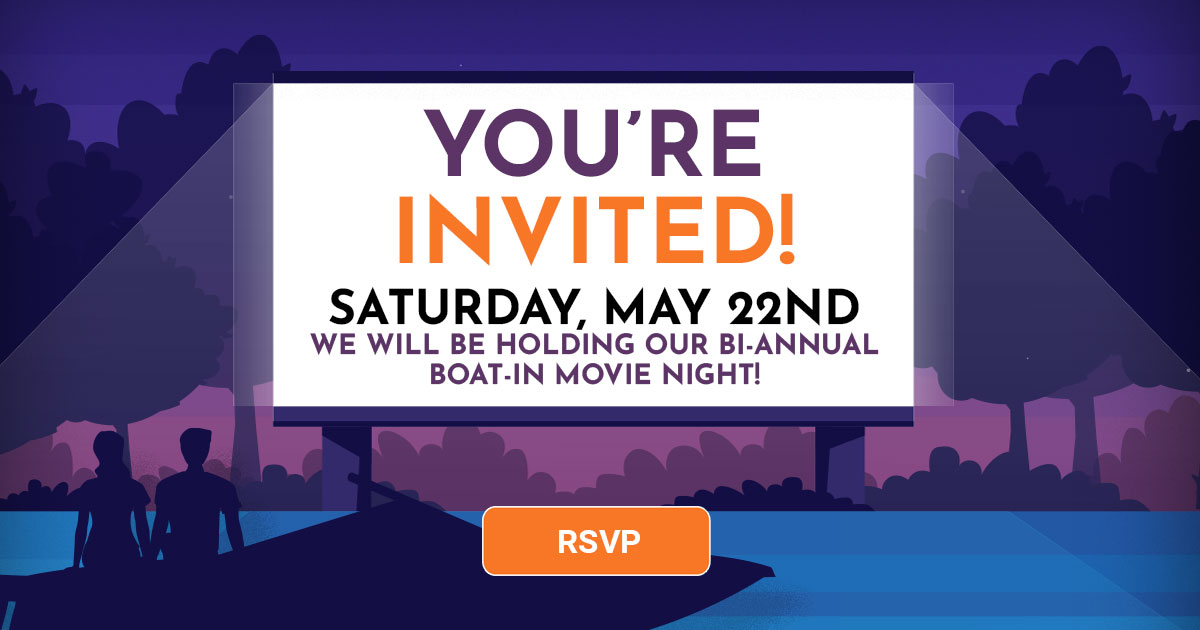 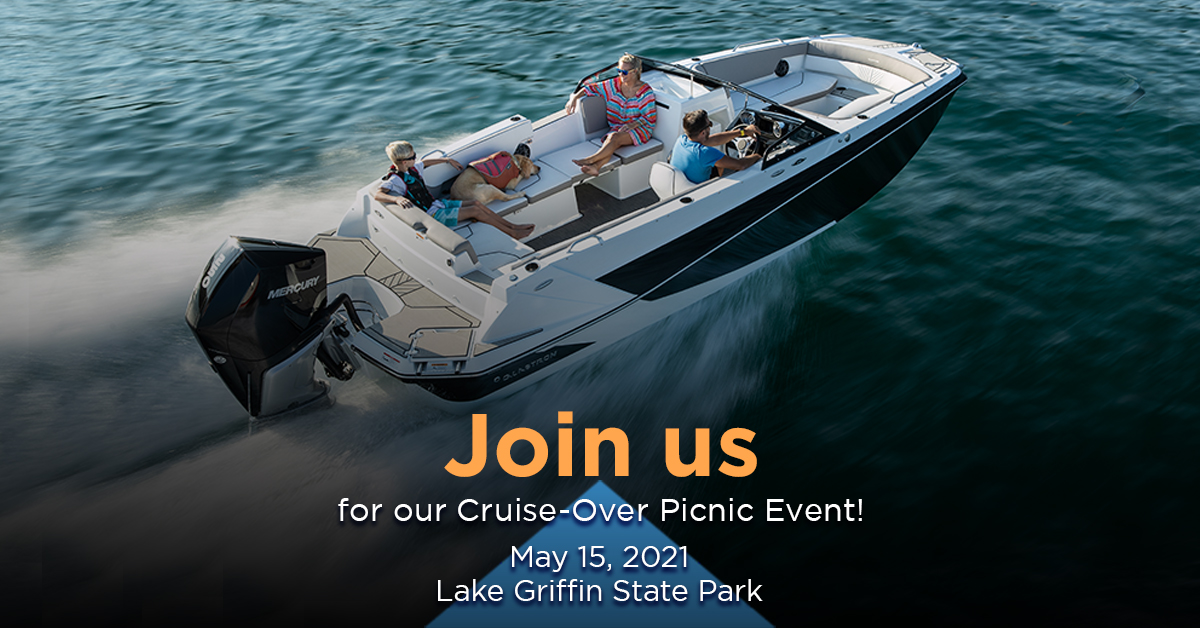 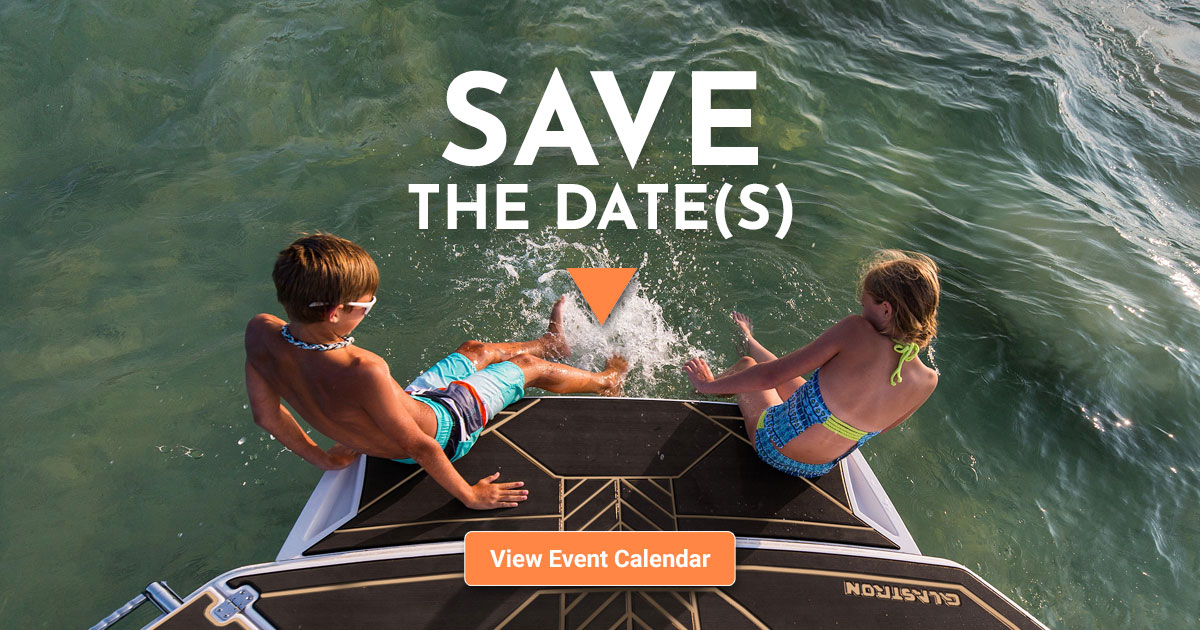 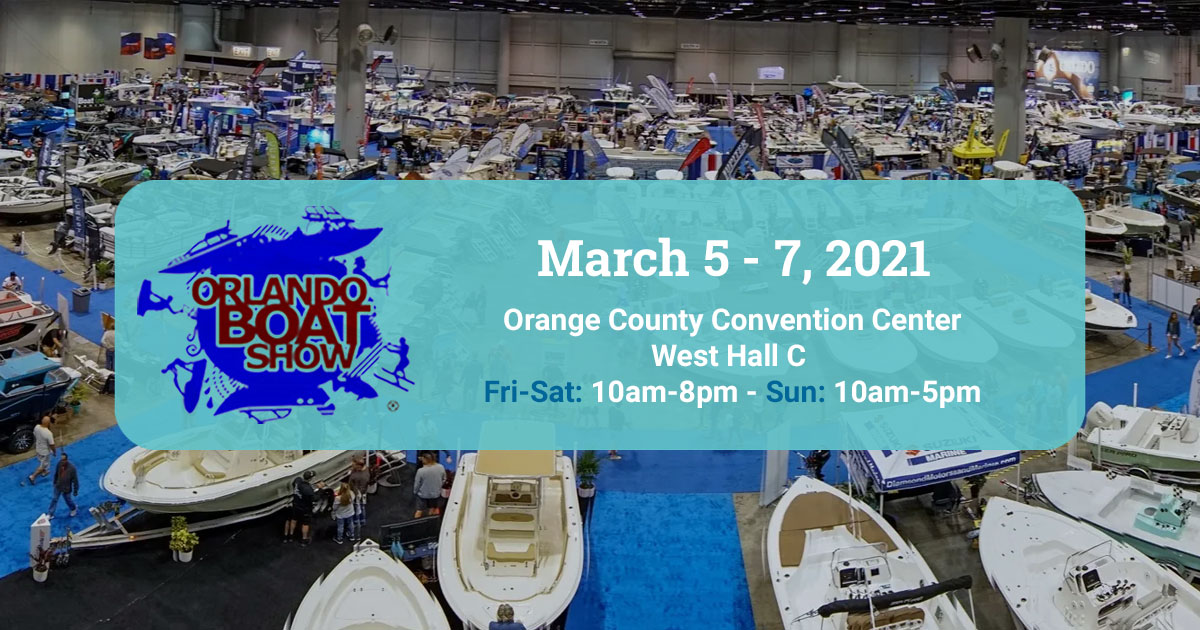 Tips Get your Fish-On Read More 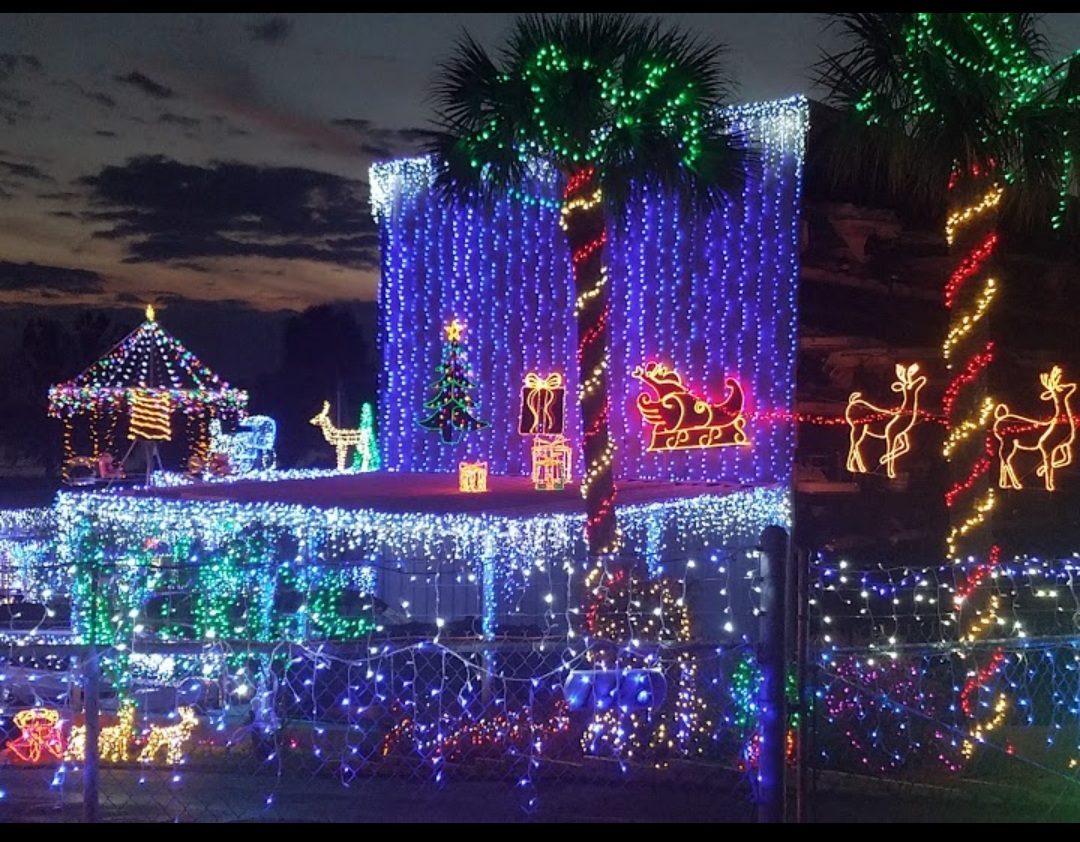 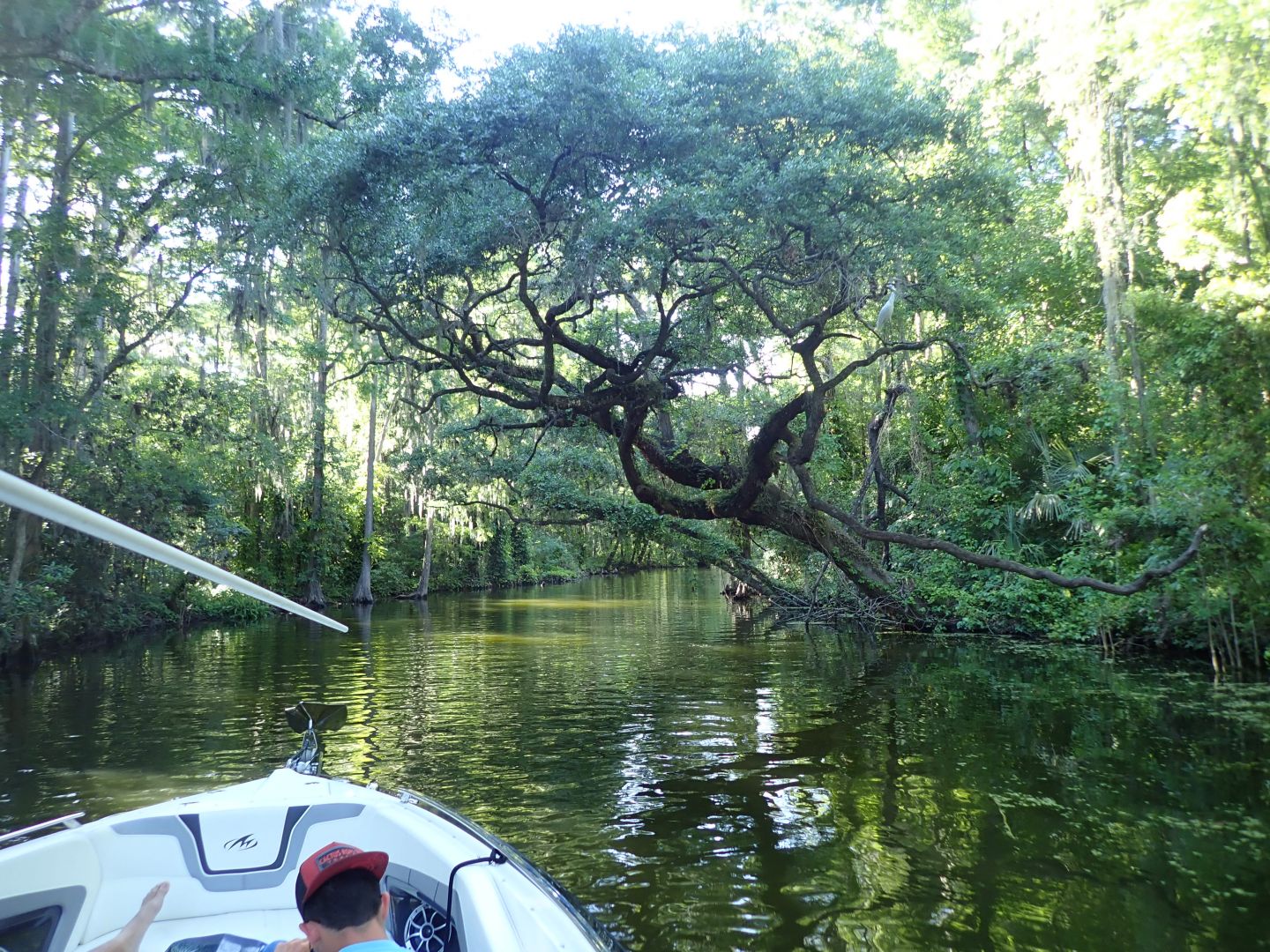 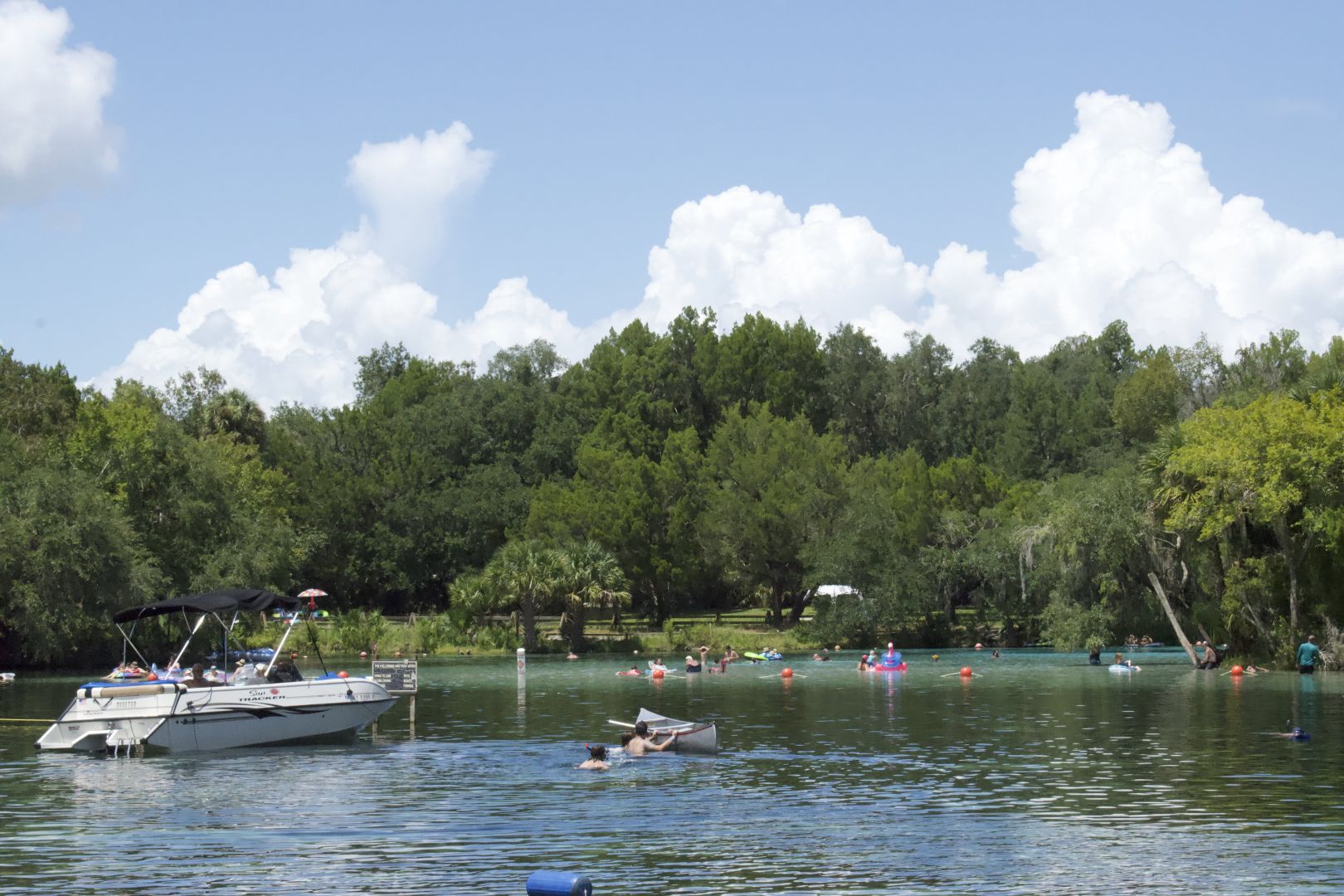